For Paris and London-based architect / interior designer Thierry Pain, his main focus is to listen to his clients and interpret their ideas into reality.

So when he was commissioned to design the interior of a client’s Queen’s Gate Terrace home in London, Thierry was faced with a challenge. His client wanted an open fireplace in the living room, however as it was an apartment a traditional fireplace wasn’t viable, and nor was there a gas connection.

With the living room nearing completion, Thierry learnt about EcoSmart Fires, which had recently been launched in the UK.

“I chose to use EcoSmart Fires because of the flexibility, and because we couldn’t use gas or wood this was the ideal solution,” says Thierry. “I also chose the EcoSmart Fire because it’s a design-driven product, is efficient, easy to use and enabled me to install a fireplace in a unique setting.

“EcoSmart Fires are a great solution to add a different context and to give the ambience of a proper fireplace without any inconvenience.”

Thierry used three EcoSmart Fire burners for the bespoke fireplace, which incorporates a contemporary stone hearth and surrounds, and traditional exposed brick, which is also used as a design element in other parts of the room.

Since completing the Queen’s Gate Terrace project, Thierry has specified EcoSmart Fire models in three more residences. For one, he has prepared a place for an XL 900 Burner. “I would also be very interested to have an XXL Burner, or 1.5m long burner, for future projects,” he adds.

Thanks! We received your enquiry. We'll have the best person connecting with you.
We aim to get back to you in under 24 hours - if this timeline doesn’t suit your immediate needs, please do not hesitate to contact us by phone +352 20 88 22 49.
Look Book #1 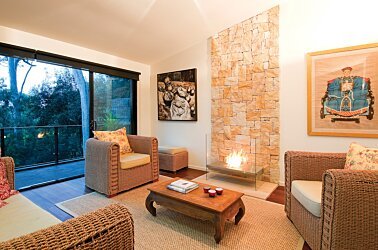 Uber Cool Luigi Preziuso has been described as a master craftsman, with a keen attention to detail in every project he undertakes. A builder by trade, Luigi has installed all types of heating over the years – including fireplaces. For his own home on Sydney’s Northern Beaches, he considered both gas and central heating before choosing a finished model – EcoSmart Igloo – from the Designer Range. 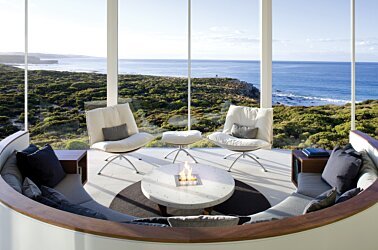 Eco Luxury A 20-year veteran of high profile Australian luxury lodge properties, James Baillie is renowned for managing And developing premium experiential properties in Australia. in 2004 he and his wife Hayley opened Capella lodge on the world heritage-listed Lord Howe island, followed By the globally celebrated, award-winning Southern Ocean Lodge in the untouched wilderness of Kangaroo island’s wildly beautiful south west coast. And in 2012, the third property in the portfolio, the Remarkable lodge in Tasmania, is set to open.

Federation Fire Eco-friendly fuel, ease of operation and low running costs were the must-haves for a Sydney entrepreneur who converted a wood-burning fireplace in a Federation property using a Scope 700 Grate from the EcoSmart collection. 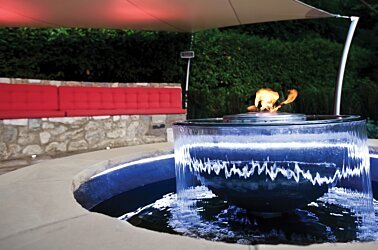 Chalice of Fire The team at Fabric Ten in the UK understands outdoor environments. Its core business is creating permanent tensile structures – sail shades – for residential and commercial outdoor areas. “At Fabric Ten we look at each project as unique, and pride ourselves on delivering individual solutions for individual people, taking care to offer a high quality experience from design to installation,” says architect/ designer Michael Reed. 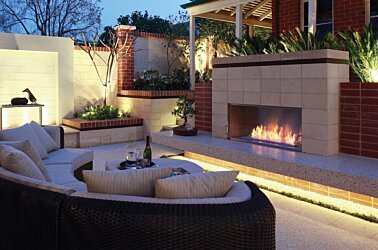 Great Expectations The EcoSmart Fire 1200SS Firebox was an essential ingredient in the transformation of a 30-year old Mount Lawley garden in Western Australia into a sophisticated all year round outdoor space. 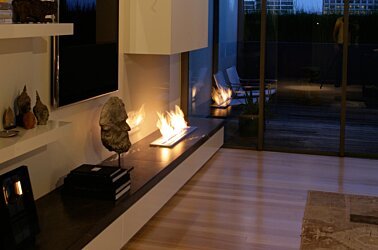 Inner City Style The first time award-winning, Sydney-based interior designer Pia Francesca Ruggeri specified an EcoSmart Fire was for her new home in Sydney’s Eastern Suburbs. The reason? She specifically wanted to have the ambience of an open fire, but knew a traditional fireplace wasn’t feasible given she lives in an apartment. 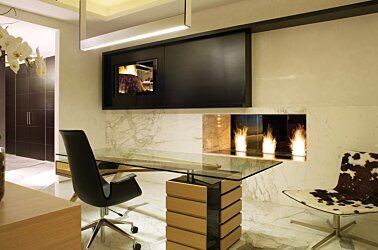 Green and Easy For Miami based architect Pepe Calderin, discovering EcoSmart Fire was a defining moment, both for him, and his high-end clients.